This writing process case study outlines the process used in a partnership between the College of Education and Human Development (CEHD) at the University of Minnesota and the Anoka Hennepin School District. In 2016 they worked together to produce three open textbooks for the social studies department. The project included foundational training in understanding open, as well as hands-on textbook development.

Three five-person groups wrote three books. To begin, the group brainstormed what topics to address in the textbooks. This involved considering the students who would ultimately use the books, and how the books fit into the overarching curriculum.

Next, as this guide recommends, the groups worked together to address what their textbook would look like by defining content structure. With the structure established, the group looked to what each of those larger segments might contain by defining book elements. The resulting outline allowed instructors to effectively align their content and structure.

Next, the groups spent time, as individuals, seeking existing openly licensed material that might suit the topic. Groups were given nearly a month to find content and evaluate licenses to determine what could be remixed or reused to meet their goals. In order to assure materials were evaluated with consistency, a basic rubric was provided (see the chapter on open licenses).

Group members were divided into writer, curator and archivist roles (as described in the previous chapter). Since the groups had more than three people, there were several writers.

As writers were evaluating existing resources, the CEHD project manager created a collection of Google Drive folders for each book. Each chapter or unit had a folder, and each page within those folders coincided with the elements of the book (for example, the learning objectives, key terms, and body). 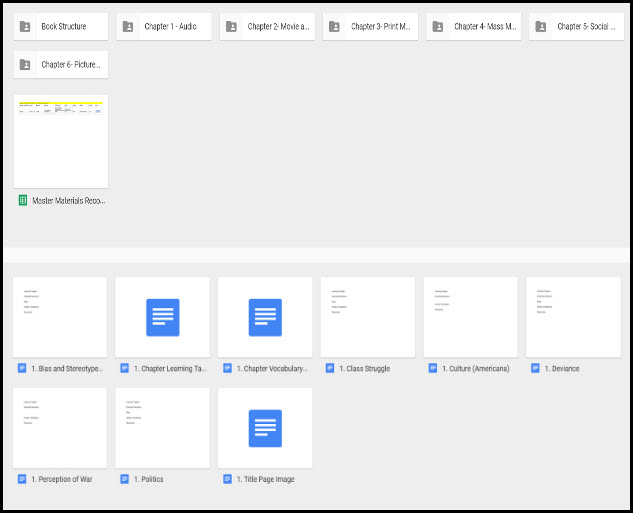 Writers reconvened to discuss the materials they collected during the Evaluation process, and, using their Content Framework, began writing their books. This step was slightly different for each book based on the objectives — in some cases, authors were creating a book that was a supplement to a trimester-long activity. In other cases, authors were writing a traditional textbook or making a supplement to a course that reflected current events.

During the production period, groups of authors worked together and separately. This was largely determined by the district’s time frame, which required a highly condensed book production period, limiting authors to only four days of work together on-site.

After completing a chapter, the group reviewed the content for gaps and edits. Ideally, authors swapped content for review, lending a fresh set of eyes to the chapter.

Once the book was completed, it was again reviewed by the group as well as a copyeditor. The books were then imported to Pressbooks, for final formatting, proofreading, and attributions.

Authoring Open Textbooks by Open Education Network is licensed under a Creative Commons Attribution 4.0 International License, except where otherwise noted.