Poets are sometimes asked why they write poems. My answer to that question involves a metaphor from photography. In poetry I try to freeze-frame a moment, capture a scene in an effort to unpack its meaning and explore its significance. A successful poem’s meaning is always greater than the sum of its parts. The same is true for photography.

Each photograph contains a scope of meaning that only partly consists of what is pictured in the frame. There is a comment made before the photo was taken, the reason people were gathered, the significance of an object, and so on. We talk about these aspects of photos whenever we share them with others: by their very nature they prompt us to talk about our memories.

Photos also prompt good writing. It is obvious to write about the memory a photo invokes; for this exercise we move beyond mere memory in an effort to shift the paradigm of what it means to look at a photo. We change the way we look, then write about what’s there. It’s about perceiving more deeply both inside and outside the frame. In recent years our relationship to photography has changed due to the ease of taking digital photos. We are inundated with them and risk becoming desensitized to really seeing them. This exercise encourages a greater appreciation for photography as a visual poetic text, while generating raw material for creative writing.

As with any writing prompt, a photograph can be used as an antidote to writer’s block. Photographic prompts circumvent the thinking processes that hinder creativity. They force the writer to make intuitive leaps. “Changing Focus” can be used with personal snapshots as well as with photos the writers have not seen before. Personal photos usually result in more sensitive personal writing, but both known and unknown photographs can access an individual’s creative core and express the student writer’s singular voice.

The aforementioned approach to a photograph—writing about what is in it—can result in the purely factual: that’s my mother and father, or purely imaginative: Martians Rleepo and Froop appeared in the guise of an old married couple. There’s value in practicing both extremes of that spectrum as warm-up exercises: render the photograph as “just the facts, ma’am” and pure fancy. As practice exercises these are not related to specific outcomes any more than sit-ups are related to the outcome of a tennis match. Changing Focus is rooted near the factual end of the spectrum. It’s about authentic experience, not artful cleverness.

The facts in the frame:

It’s a photo of my parents with my daughter.

It’s a photo of my parents and my daughter in my living room.

The not visible setting:

at my mother’s seventieth birthday party.

Ho-hum. So far this is not a photograph worth talking about. It’s only of slight interest to me. But there’s more.

The situation and story:

It’s the last photo ever taken of my father.

He died the next day, totally unexpectedly.

I’m still not there. Poignant as they are, these boldface words are facts I already know. I can only arrive at the truth the photograph holds (what I don’t know that I know) when I explore it as a writing prompt.

With the photo below, I used the prompt: “Write about what happened the moment before the picture was taken.” The resulting poem follows. 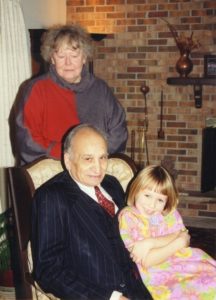 The Last Photograph of My Father

My daughter is in his lap

that will come from a friend

but that is not the miracle.

The miracle is my mother

behind his chair. No one asked her

not because she doesn’t belong,

but my mother refuses to be

A childhood snapshot shows her hitting

Even in a wedding photo she waves

an angry arm at the photographer.

No one asks to take my

This was to be of my father and daughter,

but she got up unbidden,

positioned herself behind him,

and though unpracticed, she smiled,

wanting to be there, as if she heard

his heart counting down.

It was a joke in our family that our mother hated to have her picture taken. We’d point the camera her way just to tease her into stomping a foot and waving an arm so the cigarette smoke trailed overhead. As years passed the joke grew old and we no longer bothered to try. On her seventieth birthday I hosted a small gathering. My father who lived in another state was up for a visit. Something was in the air, because no one wanted the day to end. My uncles didn’t even leave to watch the Super Bowl. Near evening I spied my daughter sitting in my father’s lap and took up my camera to snap a picture of them. As I adjusted the exposure to take one more, a matter of seconds, my mother got up, put out her cigarette, crossed the room to stand with them. She wanted to be in the picture? Strange. I didn’t say anything. I took the picture.

His death the following day rocked the very foundation of the world I had always known, a world that had revolved around my parents’ turbulent marriage. Not until the writing exercise did I discover what I had never really believed—my mother had loved my father.

Rasma Haidri grew up in Tennessee and makes her home on the Arctic seacoast of Norway. She is the author of the poetry collection As If Anything Can Happen (Kelsay Books, 2017) and three college textbooks. She holds an M.Sc. in reading education from the University of Wisconsin and is an MFA candidate at the University of British Columbia.

Vanguard: Exercises for the Creative Writing Classroom by Rasma Haidri is licensed under a Creative Commons Attribution-ShareAlike 4.0 International License, except where otherwise noted.