Many of today’s undergraduate writing students have grown up with an affinity for the fantastic. The success of books like Harry Potter, Percy Jackson, Lord of the Rings, and Game of Thrones, coupled with the popularity of authors like Aimee Bender, M.T. Anderson, Laini Taylor, Kelly Link, and Holly Black, indicate a desire to engage with narratives that transport and transform. Many of my students enter the classroom with the fifth book of a fourteen-part epic series tucked under their elbows, fingers itching toward the pages while we discuss craft. These popular series are epic in their scope, ideas, and plot. They detail magical worlds full of imagination and adventure, characters layered in the history and conflicts of their empires, power struggles between rival groups, and duels that spark and captivate.

This exercise utilizes the largesse of the fantasy genre to help students explore fundamental elements of craft, storytelling, and character construction. By approaching these facets of narrative through the fantastic, the magical, and the absurd, students can practice critical building blocks of narrative using creative, nonlinear methodology. Fantasy stipulates that all worlds are possible. This freedom allays student insecurity regarding rendering realistic, dynamic, and nuanced characters. The step-by-step guided worldbuilding process of this exercise helps free students from linear thought in favor of spontaneous creation. Once the details of the world have been established, the students have enough raw material to form a protagonist and general narrative arc that suits such an environment. By first creating the world, culture, and creatures, students build narrative conflict and tension that can later be explored by their hero, who is developed during the final stages of this exercise. Students approach each component of fantastic worldbuilding through micro building blocks of detail, allowing for spontaneous creativity and invention without the weight of an entire proverbial world on their shoulders.

This first component of the exercise will familiarize students with the structure of Joseph Campbell’s Hero’s Journey. Students will relate the theory of the monomyth to popular works, connecting narrative structures across other media.

The stages of the Hero’s Journey, as applied to The Wizard of Oz:

Part II: Worldbuild Your Way into a Narrative Arc (30­–45 Minutes)

In this second component, students will create entire fictional empires from the outside in. They will form a protagonist and chart their narrative arc, but only after they have formed a rich bank of details from which to source their character’s main conflicts, aspirations, and abilities. For this exercise, it is best to provide students with a blank sheet of paper. Students may use their own writing utensils, but this exercise works most effectively if the teacher brings in markers, crayons, or colored pencils. This switch from typical writing materials helps to break students from classroom-related insecurity. Furthermore, the use of color can stimulate creativity. 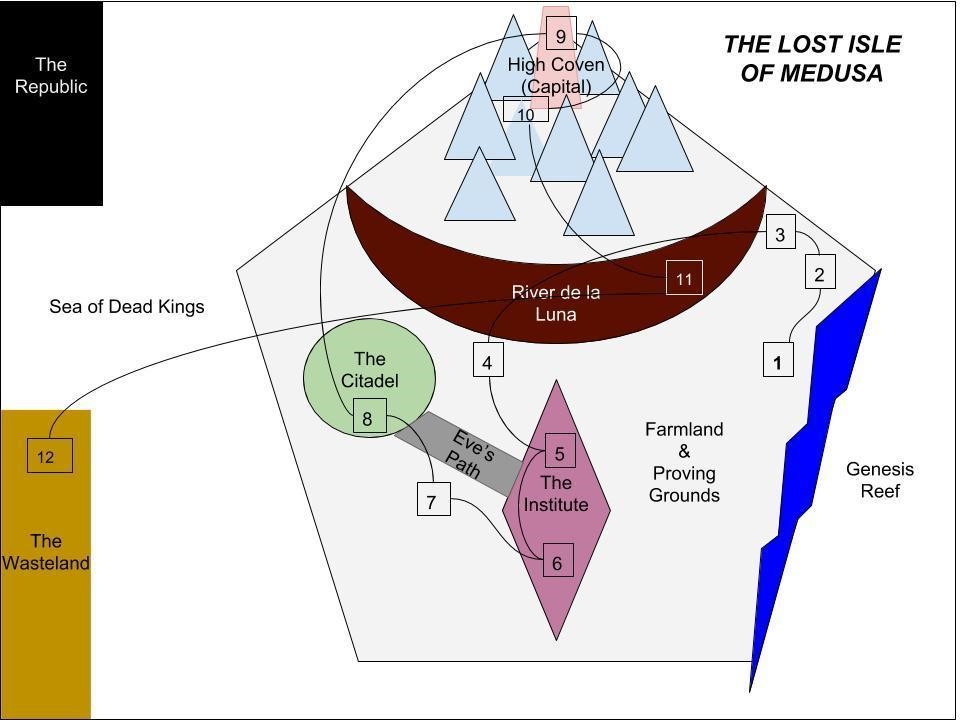 Claire Agnes is a Pushcart-nominated writer of fiction and memoir originally from West Chester, Pennsylvania, and the daughter of a veterinarian and a blacksmith. She was the recipient of the 2015 Rowan Award for Women Writers, winner of the 2018 Adrift Short Story Contest, and a finalist in Narrative‘s 2019 Under 30 Contest. Her writing has been published or is forthcoming in Entropy, From the Fifth Floor, No Tokens, and Driftwood Press. She has spent time as a writer-in-residence at Stone Court, a Global Research Fellow in Prague, and a shaman’s apprentice in Iquitos. She serves as curator for the KGB Emerging Writers Reading Series in Manhattan, is a reader for Pigeon Pages, and is assistant fiction editor for Washington Square Review. She lives in Brooklyn, where she pursues her passions as a dedicated cat mom, occasional drag king, MFA candidate, and professor of creative writing at New York University.

Vanguard: Exercises for the Creative Writing Classroom by Claire Agnes is licensed under a Creative Commons Attribution-ShareAlike 4.0 International License, except where otherwise noted.